Nigeria's secret police have been holding, Omoyele Sowore, founder of a New York-based news site since his arrest August 3.He was initially detained by the Department of State Services (DSS) for calling a nationwide demonstration against President Muhammadu Buhari's government, but formal charges against Sowore, including treasonable felony, cyberstalking and money laundering, were made public only last week.A court in Abuja ordered the journalist to be immediately released pending his arraignment, according to court documents seen by CNN.His lawyer, Femi Falana, said the journalist is being held illegally and accused the government of bringing up trumped-up charges against him."We are saying the machinery of the state cannot be used to harass political opponents," Falana told CNN.DSS spokesman Peter Afunnaya told CNN the case was before the court and declined to make further comment. Afunnaya said he would "get back" with more information about the journalist's whereabouts.Sowore ran against Buhari in Nigeria's February elections and has joined campaigns decrying corruption and poor governance in previous governments in the West African nation."Simple elections can no longer save Nigeria or improve Nigeria's democracy," the former presidential hopeful told Arise News in July."Nigerians must take their destiny in their hands, and we deserve or must have a revolution in this country, particularly if we don't want war."Sowore was detained two days before the demonstration August 5. Police fired tear gas to disperse supporters who gathered at various venues in three cities to protest. 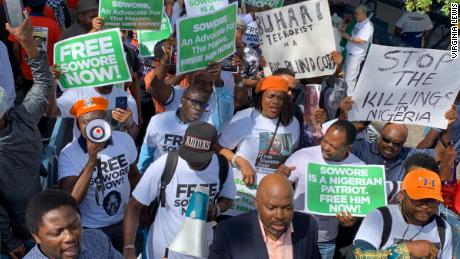 His arrest has sparked protests and criticism of BuhariRead More – Source