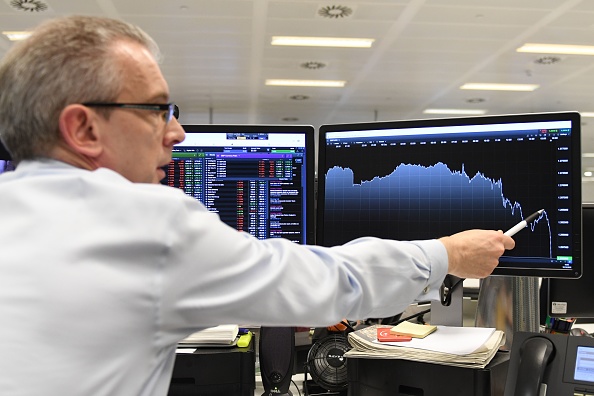 Sterling has tumbled to fresh two-year lows after official figures showed Britains economy contracted in the second quarter, raising fears of a recession and adding to no-deal Brexit worries.

Against the euro it had fallen 0.7 per cent, meaning a pound bought €1.077, pushing up costs for Britons heading to the continent for their holidays.

The FTSE was boosted by the falling pound but had nonetheless fallen 0.1 per cent to around 7,280 on a day of European stock market weakness.

The contraction of the economy was driven by the unwinding of stockpiling that took place around the original Brexit date of March as well as a global slowdown amid heightened trade tensions.

It has added to traders aversion to the UKs currency. Sterling has tumbled over 2.7 per cent against the dollar since Brexiter Boris Johnson became prime minister on 24 July.

Traders are increasingly factoring in the rising chances of a no-deal Brexit, which most think would be economically damaging. Johnson has said Britain will leave the European Union on 31 October “come what may”.

The fall in Britains GDP “has raised concerns that a recession in the UK is on the way if its not already here,” said Ruth Gregory, senior UK economist at Capital Economics.

She said the inversion of the UK government bond “yield curve” – meaning yields on longer-dated bonds are lower than on shorter-dated ones, implying short-term risk is higher – added to recession fears.

“In the UK, a yield curve inversion has preceded all three recessions over the last 40 years,” she said. Two consecutive quarters of negative growth amount to a technical recession.

Garry Young, economist at the National Institute of Economic and Social Research, said: “There is a significant risk that the economy is already in a recession that began in April.”

He said growth “is set to remain weak in the third quarter in the face of a global slowdown and continuing Brexit-related uncertainty”.

Rehan Ansari of foreign exchange provider Caxton FX said: “Todays figures will mount further pressure on the pound as the market evaluates whether this will warrant an adjustment to monetary policy.”

RANKING: Top 10 Travel Websites Most Visited by US Hispanics

Gold may lose some shine; prices to fall towards $1,250 level in medium term