A series of “suspicious” overnight and early morning fires in a New Jersey community are under investigation to see whether they are connected, officials say.

Fire crews from neighboring towns were called in to help the Linden Fire Department put out the flames at a house fire Thursday night – the second blaze to break out in the town within mere minutes.

The multi-alarm blaze at a home on Seymour Avenue broke out Thursday around 10:30 p.m., 30 minutes after another fire broke out two blocks away on Wood Avenue.

Video from Chopper 4 following the fire showed charred remains of what once was a dwelling. 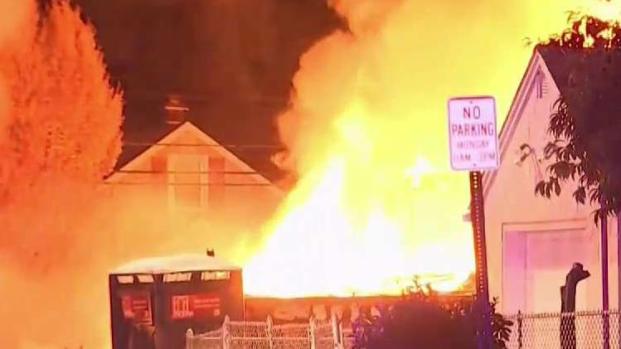 Linden authorities had to get mutual aid from three different towns to assist them in putting out the fires.

Linden Mayor Derek Armstead tells NBC 4 New York “the fires are definitely suspicious,” although he did not say it was arson.

No injuries were reported, according to Linden Police Lt. Christopher Guenther, however resident from a neighboring building near the Wood Avenue fire were evacuated, while residents from a nearby home next to the site of the Seymour Avenue blaze were displaced and relocated with the assistance of the American Red Cross.

‘Boris blimp’ takes to the London skies in pro-EU protest