They had been brutally attacked while traveling across Veracruz state in Mexico, in a tragedy that underscores the desperation driving so many Central Americans to make the dangerous trek north to the United States by land, often putting their lives in the hands of smugglers.The travelers were Guatemalan, according to President of the Morelos State Human Rights Commission Raúl Hernández. The boy, Cristian, and his father Rudy, 37, left from Guatemala on May 28 this year. Cristian's uncle and teenage cousin were also on the trip. In total, it was a small group: Two brothers traveling together, each bringing a son.They had hired a smuggler in Guatemala that would take them all the way to the United States, but the smuggler abandoned them in Mexico, Hernández said, where they were kidnapped.Their kidnappers were members of Los Zetas drug cartel, according to Morelos State Secretary of Interior Pablo Ojeda Cardenas. They allegedly called their victims' relatives in the United States, demanding a ransom of $12,000, he said. The family was able to send $8,000, but didn't hear back from the kidnappers.A few days later, on July 6, Cristian and his father were found lying on the side of a dirt road in Morelos state, left for dead. The man's throat had been slit, but his son was still breathing.Authorities later said that the uncle and cousin managed to escape, and are now in the care of Mexican authorities, according to a spokesman for the Morelos Governor's Office.Cristian was taken to a hospital in the city of Cuatla, where he is getting psychological treatment, in addition to medical care. He "[…] underwent surgery and is currently in good health," the Guatemalan Foreign Ministry said. 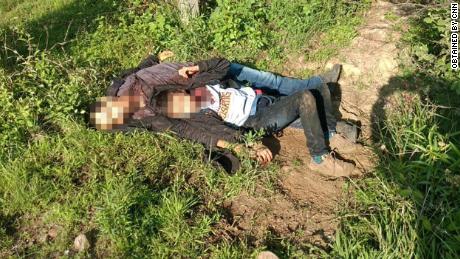 Migrants traveling through Mexico are routinely the victims of crimes that range from theft and extortion to rape and murder. In 2010, the bodies of 72 migrants, 58 men and 14 women, were discovered in a mass grave in northeast Mexico. Mexican authorities said then they believed most of the victims were from Honduras and El Salvador, although some came from as far away as Ecuador and Brazil. The mass grave was discovered about 14 miles (22 kilometers) from the town of San Fernando in Tamaulipas state, near the border with Texas.The trip itself can be perilous: Earlier this summer, a photographer captured an image of Oscar Alberto Martinez and his 23-month-old child Angie Valeria Martinez, face down in murky waters littered with weeds near Matamoros, Mexico. They had drowned the day before, while trying to cross the Rio Grande into Texas. The photograph shook viewers worldwide and was a reminder of the harsh realities of the migration crisis and risks taken to reach the southern US border.Read More – Source

May narrowly avoids defeat in parliament on EU trade laws