New York City is holding an open call for artists who are interested in creating a public monument that honors two iconic activists who had a deep impact in the LGBTQ community. The city notes this is the first permanent public art work honoring the legacy of transgender individuals.

Last year, First Lady Chirlane McCray, Deputy Mayor Alicia Glen and the Department of Cultural Affairs announced She Built NYC, an effort to commission a public monument or artwork that honors womens history in New York City. The effort kicked off with an open call for nominations from the public.

Nearly 2,000 nominations of women, groups of women and events in womens history that significantly impacted New York City were submitted for consideration, according to officials. To qualify, events must have happened at least 20 years ago and nominated individuals must be known for an event, movement or action that took place at least 20 years ago and must no longer be living.

As a result of this process, She Built NYC is commissioning public art works to honor seven trailblazing women whose extraordinary contributions changed New York City. 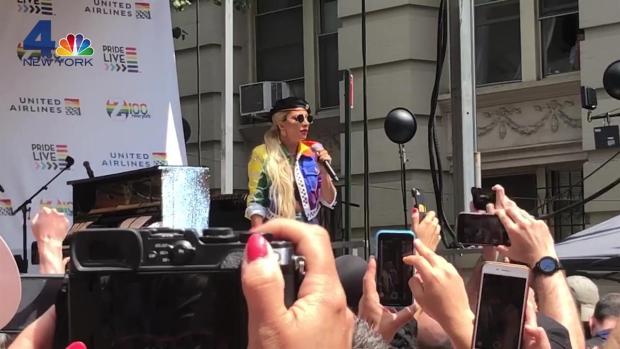 Johnson and Rivera founded STAR, a housing and support organization for homeless LGBTQ youth and sex workers, the city says. They were also leaders in the Stonewall Uprising and lifelong advocates for LGBTQ rights, particularly around racial and economic justice for LGBTQ people experiencing homelessness and poverty, the city notes.

In addition to Johnsons and Riveras work and advocacy for LGBTQ, homeless and HIV positive youth – as well as young people of color who were marginalized by broader LGBTQ rights efforts – they were also early pioneers in disability justice efforts, particularly around healthcare access for all.

A New Jersey native, Johnson was an activist whose involvement in the Stonewall Uprising, which is celebrating its 50 anniversary this year, helped pave the way toward transgender acceptance. Though she struggled with homelessness, Johnson devoted her life to advocating for gay and transgender street youth, sex workers and people in prison, the city notes.

Following Stonewall, she and Rivera co-founded STAR, the first shelter for LGBTQ youth in North America.

Johnsons body was found in the Hudson River in 1992, the city says. Her cause of death remains unsolved.

Rivera, who passed away in 2002, was abandoned by her father at birth in 1951 and orphaned at the age of Read More – Source