On the final night of the Democratic presidential primary, there were sharp exchanges over busing and segregation, a frank admission of failure on racial tensions and an attempt to open a generational divide between the frontrunners and the others.

Ten candidates again faced the challenge of standing out among the crowd.

Here are some of the top moments of the debate in Miami, sponsored by NBC News, MSNBC and Telemundo.

One of the sharpest exchanges of the night came as Kamala Harris attacked Biden on his record opposing federal busing. When she asked him to agree that he had been wrong, he refused.

“I did not oppose busing in America,” Biden insisted. “I opposed busing ordered by the Department of Education.”

Kamala Harris to Biden on Busing: 'That Little Girl Was Me'

Harris, who described being the target of racial discrimination, said she had been part of the second class to integrate the Berkeley, California, almost two decades after Brown v. Board of Education.

It was a local decision, Biden said.

Biden said he had supported the Equal Rights Amendment from the beginning, had extended the Voting Rights Act for 25 years and ended with “anyway my time is up.”

The moment was the most viral of the debate, and Biden's refusal to acknowledge that he might have been wrong stood in stark contrast to the debate's second-biggest moment involving Pete Buttigieg.

RACIAL TENSIONS IN SOUTH BEND AND ACROSS THE COUNTRY

South Bend, Indiana, Mayor Pete Buttigieg was confronted with the racial unrest in his city after a black man, Eric Logan, was killed by a white police officer who said he was attacked with a knife but whose body camera was not on.

Buttigieg suspended his campaign temporarily last week to return to South Bend, where he was heckled and shouted down at a town hall. The shooting put racism and tensions between police departments and black communities into the spotlight.

Asked why after his two terms in office, the citys police force is still only 6% percent African-American when the city is 26%, he answered bluntly.

“Because I couldn't get it done,” he said. “My community is in anguish right now, because of an officer-involved shooting.”

Pete Buttigieg on Police Reform: 'I Couldn't Get It Done' 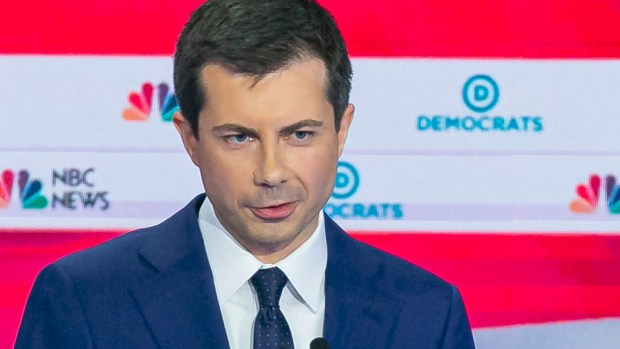 Buttigieg said he could not take sides until the investigation was complete, but added, “Its a mess and were hurting. And I could walk you through all of the things that we have done as a community. All the steps we took from bias training to deescalation, but it didn't save the life of Eric Logan.

“And until we move policing out from the shadow of systemic racism, whatever this particular incident teaches us, we will be left with the bigger problem of the fact that there is a wall of mistrust put up one racist act at a time.”

Two of his competitors, former Colorado Gov. John Hickenlooper and California Rep. Eric Swalwell, challenged him on why it was taking so long to diversify the police department, with Swalwell insisting Buttigieg should fire the police chief.

DIFFERENCE BETWEEN THE VETERANS

The debates first question established the ideological differences between the fields veterans and front-runners, Vice President Joe Biden, 76, and Vermont Sen. Bernie Sanders, 77. Biden, asked to explain his statement that the country should not demonize the rich, started with a folksy story about his father telling him that a job was more than a paycheck, that it was about dignity and respect. The country has to return dignity to the middle class, he said. Meanwhile the Trump tax cut benefitting wealthy had put the country in a horrible position, he said.

Biden, whose answers seemed not as clear as those of some of the others, wants to position himself as an electable moderate who can beat President Donald J. Trump by winning over disillusioned Trump supporters.

Each Candidate Names Their Number One Issue 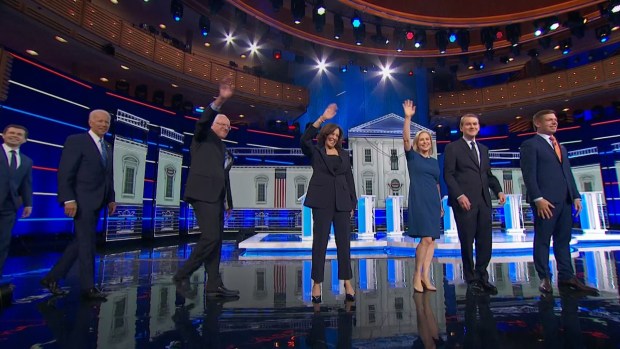 Sanders has taken on the progressive label, a democratic socialist who says he is fighting for economic equality and working people and against Trump and other oligarchs.

Pressed, he acknowledged that his plans for new government benefits, free public colleges and universities, eliminating student debt and Medicare for all would raise taxes for the middle class. But they would pay less in health care costs, he said.

Among their disagreements: whether to build on Obamacare or replace it with Medicaid for all.

Biden talked about his sons death from cancer and those of his first wife and a daughter in an automobile accident before saying, “Im against any Democrat who opposes, takes down Obamacare, and then a Republican who wants to get rid of it.”

Sanders defended Medicare for all although as for how it would be implemented, he said only, “We will have Medicare for all when tens of millions of people are prepared to stand up and tell the insurance companies and the drug companies that their day is gone.”

Another difference? The Iraq War, which Sanders singled out. He led the fight against the war while Biden voted for it, he said. Biden said he later led the effort to bring American troops home from Iraq and Afghanistan.

Swalwell made a direct pitch for a candidate younger than the fields frontrunner, Biden.

Swalwell, 38, pivoted from a statement about wiping out debt for teachers to recalling what he said was a comment that Biden made 32 years ago: “Its time to pass the torch to a new generation of Americans.”

Swalwell to Biden: 'Pass the Torch!'

It is still time to pass the torch if the country is going to confront gun violence, climate change and other crises facing the country, Swalwell said.

Biden was asked if he would like "to sing a torch song" — and though he addressed the original issue, improving education, he did avoided the question of age.

But other candidates were happy to take it on. Buttigieg, 37, tried to interject as “the youngest guy on the stage,” while Sanders called out that he was “a part of Joes generation” who had the guts to take on Wall Street, fossil fuel companies and others.

Harris, 54, broke up the argument by saying that the country did not want to witness a food fight. “They want to know how were going to put food on their table,” she said.

Later, during a discussion about climate change, Swalwell returned to his theme, pass the torch, prompting the 66-year-old Marianne Williamson to counter that a younger body did not mean new ideas.

NY Socialite Murderer Says He Wishes He Could Take Her Place

PM May to meet Scotland’s Sturgeon after Brexit standoff