What: Americas Market Intelligence presented the results of its study on The State of Innovation in Latin America, which found important similarities between the strongest companies leading the innovation landscape in six Latin American countries.
Why it matters: Innovation is a necessity for staying relevant in Latin America, a region where competition is growing at an accelerated pace in all business areas.

Americas Market Intelligence has recently presented the results of a study titled The State of Innovation in Latin America: Lessons From Innovative Companies Across the Region. The report, which is based on in-depth interviews with 85 of the strongest companies in six Latin American countries, provides insight into the current state of the ecosystem and analyzes the factors that are driving innovation in the region.

As stated in the report, "innovation is no longer the domain of the technology industry, but a necessity for staying competitive for all businesses in the region." From financial institutions and fintechs to digital-native as well as brick-and-mortar, AMI's study shows that the most innovative companies have certain things in common. New technologies like AI, machine learning, biometrics and blockchain are one thing, but the other important ingredient is having "business models, processes, agility, collaboration and a purposeful corporate culture that welcomes and commits to innovation and creative problem-solving."

According to the study, the most innovative entities are: 1) those able to create and deploy innovations in payments and other business areas; and 2) those with the greatest potential impact on the advancement of electronic payments. With this in mind, AMI analyzed four conceptual pillars to rank the participating companies. 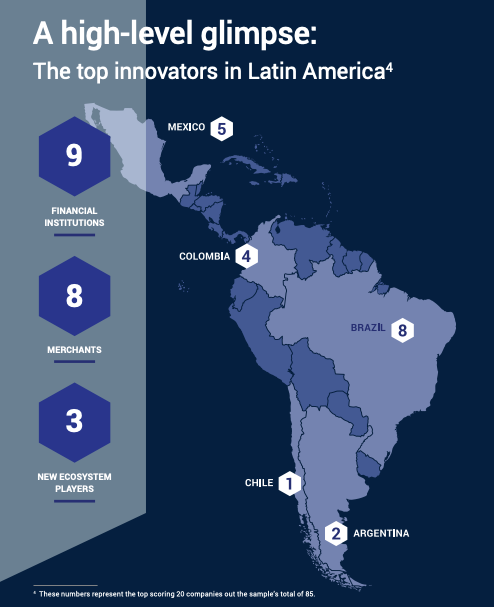 Source: AMI, The State of Innovation in Latin America

AMI's study shows that Latin American countries are trying to include innovation in their culture. As disruptive start-ups take the stage, even traditional companies are modifying their paradigm to embrace the new standard, and though company verticals and markets vary, the report suggests that digital native companies and financial institutions rank higher for internal culture of innovation, while traditional brick-and-mortar merchants are struggling to change their core processes.

Some of the indicators of strong internal support for innovation have to do with the presence of an innovation department, an innovation lab, the number of available APIs, the percentage of open APIs as well as the APIs that were launched in the last year, and the number of partnerships with other fintechs or start-ups.

The most innovative companies have created explicit teams and spaces dedicated to promoting innovation, they have embraced the use of APIs and have partnered with as many as 15 different start-ups.

As stated in the report, the most innovative companies have not only incorporated innovation into the essence of their culture, but they have also shown an ability to quickly develop and deploy new features, products, and services. To decide which companies are doing it better, AMI analyzed three things: the number of proofs of concept developed in the past three years, the percentage of proofs that have been launched successfully, and the time elapsed between ideation and deployment.

The survey results show that the most innovative entities developed almost three times the number of payments-related proofs of concept (POCs) compared to the regional average. Among the most innovative, an average of 65% of these went live, compared to 55% of the average overall. And the time-to-market was also speedier—an average of 4.9 months compared to the regional average of 6.5. Among the quickest of executors is Rappi, which reports that proofs of concept are launched on a monthly basis; recent launches include Rappi Prime, RappiPay (a co-branded Visa credit card), QR codes and the nonstop onboarding of partner merchants.

Source: AMI, The State of Innovation in Latin America

In order to understand innovation through the use of technology, AMI assessed how well and to what an extent Latin American companies have adopted new technologies in their industries, such as artificial intelligence, machine learning, blockchain, chatbots, digital wallets, biometrics, and tokenization.

According to the report, four out of five of the surveys most innovative companies use AI and machine learning, while 53% of all survey respondents do the same. Digital-based merchants such as Despegar.com, Cabify, Viajes Éxito, and Netshoes make about 80% of their sales online, while brick-and-mortar stores reported only 7% of their sales were made on digital channels. Moreover, 32% of respondents do not have a mobile app, while 26% of e-commerce merchants sales are made over a mobile device.

Survey results reveal that at the highest level, financial institutions adoption of new technologies is largely experimental. While they lead the region in the usage of data analytics, artificial intelligence, machine learning, chatbots and blockchain, most are in exploratory phases.

The final "pillar of innovation" in the study has to do with companies' ability to adapt and scale. "Our most innovative Read More – Source