Venezuela's Information Minister Jorge Rodríguez called Guaido's action a "coup" on Twitter, adding that the government is "deactivating a small number of traitorous military personnel.""We call on the people to remain in maximum alert so that, together with the glorious Bolivian armed forces, we defeat this attempted coup and preserve peace. We will win," he said.Guaido, who is head of Venezuela's National Assembly and has been recognized as president by dozens of other countries, has led months of protest against the government of Nicolas Maduro, yet Tuesday marked his boldest attempt yet to involve the military in the removal of the Venezuelan leader.Speaking with opposition figure Leopoldo Lopez by his side, Guaido declared the "start of the end of the usurpation" in a video, which he said was filmed in a military airbase in Caracas, La Carlota. Lopez, who is under house arrest, said on Twitter that he was released by the military."Our armed forces today, valiant soldiers, valiant patriots, valiant men connected to the constitution have come to our calling, we have come to this calling," Guaido said in the video.Guaido has called for nationwide demonstrations on May 1, and said his announcement signaled the start of that protest a day early.He later tweeted, "At this moment I am meeting with the main military units of our Armed Forces, beginning the final phase of Operation Freedom."Guaido has spent the last few weeks visiting towns and cities outside Caracas, drawing large crowds in his bid to pressure Maduro to step down. 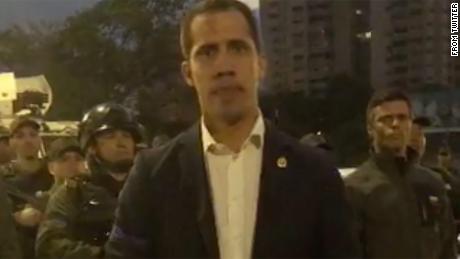 Disabled Muslim boy branded ‘terrorist’ by teacher in US – reports

More Than 400 Elevators Got Stuck During Blackout, FDNY Says

Prince William and Kate to visit Pakistan in the autumn