Distraught commuters could learn Monday whether the tyranny of the misplaced wreathes on the Holland Tunnel will come to an end.

The Port Authority planned an afternoon press conference to announce the results of a public poll on the "Great Holland Tunnel Decoration Debate."

In announcing the press conference, the Port Authority said: "Should we re-deck the Holland?" 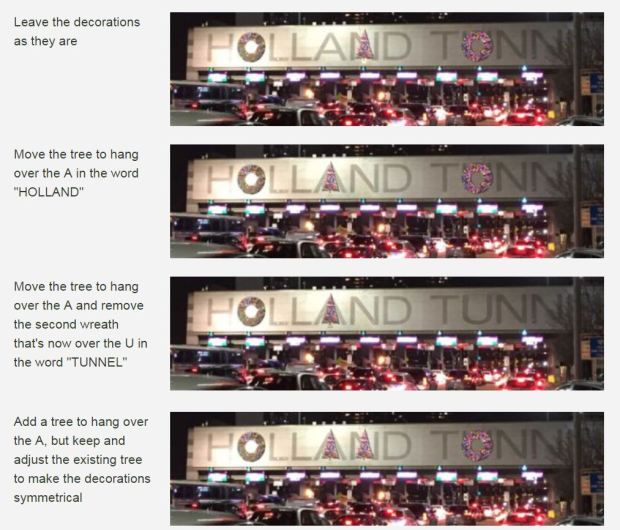 The unusual placement of wreaths and Christmas trees on the Holland Tunnel side has caused a furor online and led to a Change.org petition to move the decorations.

While the two “O-shaped” wreaths covered the “O” and “U” of Holland Tunnel, the “tree-shaped” wreath was placed over the “N” instead of the “A."

“Youve obviously put the wreath over the O and another wreath over the U cause its kind of O shaped, but with the tree, you didnt give a flying f— because you put the A-shaped tree over the N,” commuter Cory Windelspecht told NJ.com.

Windelspecht started a petition that has amassed over 2,800 signatures.

Even Budweiser has joined in the debate. The company tweeted a picture of its Newark brewery supporting Windelspecht. The picture shows a wreath over the "U" and a tree over the "E" in Budweiser.

We stand with @WhosCory. This is what our Newark Brewery will look like until they #MoveThatTree. #TunnelNotTonnelpic.twitter.com/WkRtmMxvQj

Corbyn to back second Brexit referendum – The Times

Suspect in Deadly Neck Stabbing Wanted in Another Killing