NASA announced on Monday that the Voyager 2 probe has reached interstellar space, making it the second man-made object to do so, NBC News reported.

Voyager 2 launched a couple weeks before Voyager 1 but its trajectory took it on a longer route through the solar system. NASA said the probe crossed the outer edge of the heliosphere — called the heliopause — on Nov. 5 and was 11 billion miles from Earth.

"Working on Voyager makes me feel like an explorer, because everything we're seeing is new," said John Richardson, principal investigator for the probe's "Plasma Science Instrument."

Both Voyager probes are still considered to be in the solar system, which is demarcated as the outer edge of the Oort Cloud.

For the second time in history, a human-made object has reached the space between the stars. Now slightly more than 11 billion miles (18 bil. km) from Earth, @NASAVoyager 2 has now left the Sun's protective bubble & is flying in interstellar space: https://t.co/zRnhiaJqGS#AGU18pic.twitter.com/Zzncki4GKB 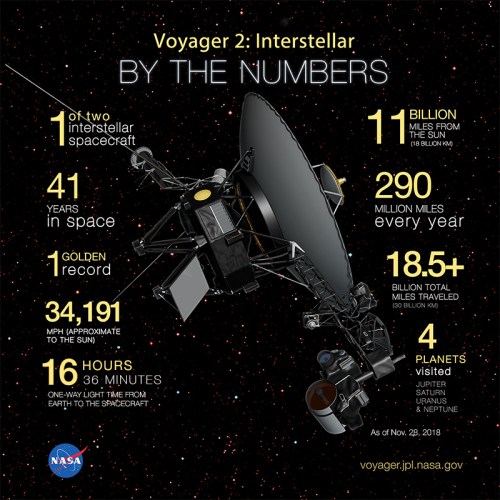 CORRECTION (Dec. 10, 2018, 11:31 a.m. ET): An earlier version of this article misstated the progress of the Voyager 2 probe. It has not left the solar system, though it has entered interstellar space.

Most EU governments back another Brexit delay, says EU source – The Times

Cats Sealed Into Buckets and Abandoned in SoHo