The first snowfall of the season may have been the most nightmarish 6 inches in tri-state history, stranding children in their schools, commuters at transit hubs and debilitating New York City in a way many said they've never before seen.

The city's Department of Education was still running school bus routes after 11 p.m. Thursday, according to a tweet from the agency. At least one commuter described a harrowing 13-hour trip home. And commuters, along with their elected officials, are not holding back their frustration, with some even calling for Mayor de Blasio to step down Friday over the abject chaos from 6 inches.

"Mayor Bill de Blasio, step down," one commenter wrote on NBC 4 New York's Facebook page. "The chaos that happened today is completely unacceptable. Clearly, you were unprepared and for that you should lose your job."

"Yesterday was a failure. A disaster," said city council member Vanessa Gibson, who spent nine hours in her car getting back to the Bronx. "I'm beyond pissed with this administration."

It was equally disastrous in New Jersey.

De Blasio, in a news conference Friday afternoon flanked by top police, fire and schools officials, declined to address those calls for his resignation. He did concede he was unhappy with the city's performance but described what happened as "a kind of perfect storm."

“Normally 3 to 5 inches of snow would not have posed this kind of problem," he said. “We are trying to learn some lessons and figure out what we can do better.”

The mayor also said there would be a full audit of the city's response to the storm.

"I am very frustrated with what happened. I am upset," he said, but "I don't think it's fair to say city agencies could have stopped all this." 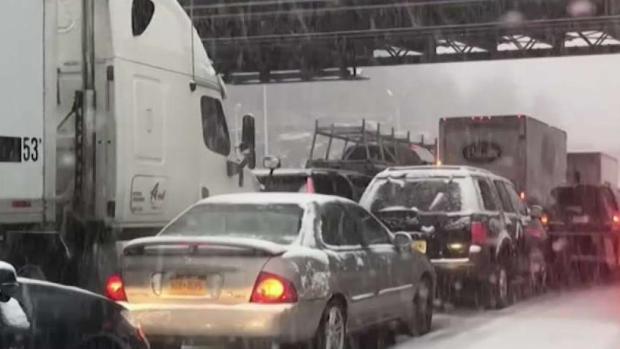 De Blasio's spokesperson, Eric Phillips, said the early storm meant that MTA didn't have snow chains on its buses. He said many of them had to pull over, "further clogging streets."

Photos showed rubbernecking from the West Side Highway to Upper Manhattan, with buses becoming disabled and getting stuck in intersections as frustrated drivers abandoned their cars to get out and walk.

“Transportation and transit are the lifeblood of our city. 3 inches of snow have crippled #NYC,” he tweeted. "Moms are stranded with their kids, people are running out of gas. We demand answers.”

As driver after driver sat in the worst traffic jams anyone can remember, as tree limbs pliunged down and as school buses sat stuck for hours with kids on them, New Yorkers began to reach their boiling points.

"It was a nightmare," said Rene Servis, who said she almost got into two crashes. "I cried. I wept. I had a meltdown."

Family Spends Night Stranded on I-78

"The bottom line is what happened is unacceptable," City Council Speaker Corey Johnson said Friday. "For New Yorkers who sat in three, five, eight hours of traffic, I'm sorry. We need to do a better job."

The scene in some places, but for the amount of snow, was almost remniscent of the Christmas blizzard nightmare that happened while Michael Bloomberg was in office. That storm, unlike Thursday's, dumped 20 inches of snow in Central Park. Streets were unplowed for days.

Nearly 150 trees fell in Manhattan, crushing cars and hurting a cop and EMTs. More than 300 downed limbs were reported and at least 40 remained hanging; the city warned people to stay out of parks Friday over concern more could fall.

Though public schools were open again Friday, the city canceled all afterschool programs and some field trips. That only compounded the ire, with a flurry of Twitter users demanding to know why that was not the case a day earlier.

Though it was hardly a blizzard, Thursdays storm was the snowiest in November in 80 years, Storm Team 4 says. It dropped 8 inches of the white stuff in Central Park, more in parts of New Jersey and Connecticut and even more than a foot in places in Orange County. The PM commute was a disaster of epic proportions.

Traffic all across the region was brought to a crawl, while it was completely paralyzed it in some spots. Downed trees throughout the city caused traffic gridlocks and the Port Authority Bus Terminal had to be partially shut down due to overcrowding. The terminal had become an immovable block of wall-to-wall commuters all gazing up at the schedule board. Lines of people waited to get into the terminal as officials urged them to take trains or ferries.

Two severe accidents on the George Washington Bridge Thursday afternoon — one of them involved 25 vehicles — added to the existing traffic nightmares.

The Port Authority said eight trucks began salting the GWB at around 1 p.m. First snow started falling at 2 p.m., which changed to freezing rain, rapidly creating slick conditions, before the 25-vehicle pileup on the eastbound side at 2:35 p.m. and the tractor-trailer accident on the westbound side at 3:20 p.m., both on the upper level. The upper level was shut down entirely as a result.

After sitting for hours in bumper-to-bumper traffic on the lower level, people bailed out of vehicles and started trekking over the bridge and snow-covered ramp back to Manhattan, filing toward the 178th Street exit.

"All delays pose an inconvenience to the traveling public," the Port Authority said in a statement Friday. "Extreme ones that extend for hours cause tremendous frustration and we do everything in our power to prevent them."

De Blasio, at his news conference, said the bridge accident was probably the number one factor in the overall transit catastrophe. 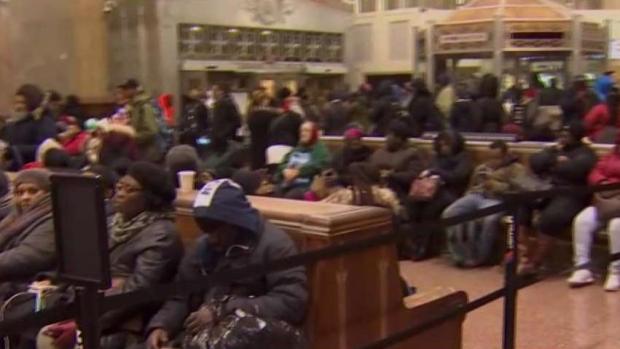 The city's sanitation department deployed only half their full arsenal of 2,200 pieces of equipment, sending out just 700 salt spreaders and 300 plows. And 1,600 workers were on normal shifts Thursday, compared to the typical 2,100 workers that are typically deployed during serious winter storms.

Sanitation commissioner Kathryn Garcia said Friday that even with the hundreds of spreaders ready to go, "we really couldn't move" because traffic had come to a halt.

"I had spreaders that sat for hours and hours without moving," she said at the news conference Friday. "We were ready to go with spreaders but the forecast did not change. It was a challenge to everyone."

At the height of the storm, when the George Washington Bridge closed, the city became paralyzed, Garcia acknowledged, adding that the department would look at contingencies for when traffic gets that bad.

"I don't think I realized how important the GWB is for the entire region," she said, adding, "It's almost like we needed lights and sirens on spreaders."

Council speaker Johnson said, "You have to prepare for the worst and hope for the best. And yesterday there was not an appropriate amount of preparation." 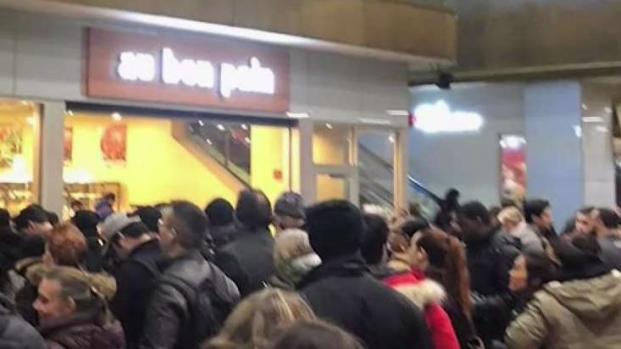