Police have released a sketch of the man who allegedly punched and stabbed a black mother of two when she got off the subway in Brooklyn last week — an attack her family has said was racially motivated.

The suspect is described as being a white man in his 30s; the sketch released Tuesday is based on a witness description, police say, though it's not clear if that witness was the victim, 57-year-old Ann Marie Washington.

Washington was hospitalized Sunday, two days after the attack, after having surgery for a collapsed lung due to the stabbing, her family told NBC 4 New York. She was on her way home from work Friday evening and had just stepped off the subway at the Church Avenue stop in Brooklyn when she was attacked, advocates said.

The man, who was white, punched her in the mouth and stabbed her in the chest while calling her a "black b—-," advocates said. Washington, who is black, is a native of Trinidad.

The attacker fled on a Q train, police said.

"If this was a white resident, a new gentrifier to this neighborhood, there would be swarms of cops here," said Imani Henry of Equality for Flatbush. "But when it is a black person who is attacked by a white racist, there isn't anything."

Afterward, the NYPD said its Hate Crimes Taskforce would look into it. Police said they didn't have all the details at the time the crime was reported.

Washington didn't realize she had been stabbed until she got home, advocates said. Even then, she thought she had been scratched in the chest until she woke up the next morning, said Kenzia Bernard Nau, a witness and a neighborhood advocate.

Advocates said witnesses shot video and there should be surveillance video of the suspect, but police haven't released it. 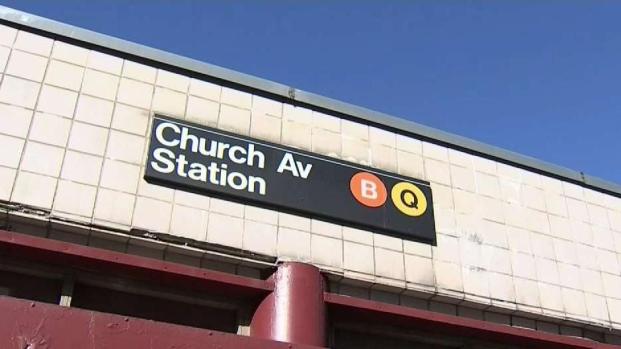 "The fact that the video isn't out right now, this is completely insane," Bernard Nau said. "This is going to keep happening."

Anyone who recognizes the man in the sketch is asked to call Crime Stoppers at 1-800-577-TIPS.