Passengers on a NJ Transit train were trapped for almost two hours — some of it in complete darkness — when a train was disabled after leaving Penn Station Monday evening. 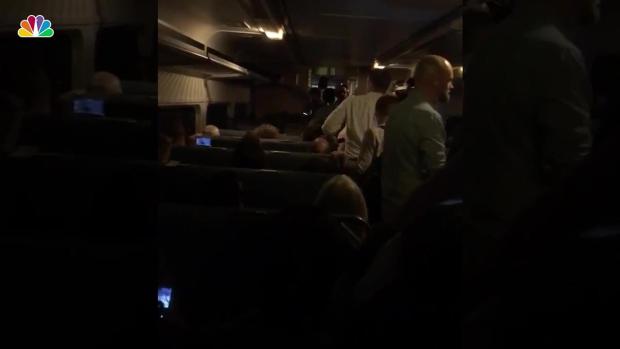 Trains on some lines were backed up for as much as an hour due to congestion caused by the incident. Get the latest transit alerts here.

Commuters posted videos to social media from the stuck train that appeared to show a power outage in some carriages, with passengers sitting in darkness.

@NJTRANSIT we really all deserve a refund. It is crowded, uncomfortably hot, and we dont know when well get home. October on #njtransit has been hell. #nj#newjersey#mobo#montclair#montclairboonton#commutepic.twitter.com/xDWNHupIdi

Some complained that they were uncomfortably hot and crowded. Others reported feeling scared, with one person saying fights were breaking out on the train and two passengers had become sick.

"1 hour now stuck on a bridge outside Newark on @NJTRANSIT with no air. Two sick passengers. Fights. Cops have now had to walk the bridge to come on and make arrests and when they opened the door to let them on, people jumped off and started running for the platform. Insanity," Sarah Hansen posted to Twitter.

Rudy said a rescue train arrived shortly before 8 p.m. and pulled the train into Broad Street. He said no passengers were treated by EMS.

Nude Photos of Minors Found at Billionaire’s NYC Mansion: US

‘Democrats could, if elected in November, expand the size of the Supreme Court’