A Florida man is in custody in connection with the pipe bombs mailed nationwide this week, law enforcement sources told NBC News.

Three officials identified the suspect as 56-year-old Cesar Sayoc Jr., originally from Brooklyn and currently of Florida. Public records show he has an extensive record of arrests for battery, theft, moving violations, and steroid-related charges. DNA evidence played a role in finding him, several officials said.

The Department of Justice planned a news briefing for 2:30 p.m. ET.

Authorities towed away a large white van, its windows plastered with photos of President Trump and Vice President Pence, from an Autozone parking lot in Plantation, Florida, Friday morning, as part of the investigation. Autozone says Sayoc, a registered Republican, according to voting records, is not an employee of the store and apparently had been there to shop when taken into custody.

"There was a loud boom, and when I looked out, I saw a whole lot of police cars," one witness to the arrest, a woman who declined to give her name, told NBC News. "Theres a lot of commotion out there. All I know is they arrested the bomber."

A cousin of the suspect described Sayoc as a "very nice, thoughtful person." Asking not to be identified, the woman said she was stunned to hear about his arrest. She knew nothing about his political beliefs or arrest history, she said. The two hadn't connected in 20 years until recently, when her father died.

"It was mostly just small talk, how's your family, that kind of thing," the woman said. "I don't really know that much about him. We have a very big family."

The arrest news followed shortly after the discovery of two more suspected mail explosives in New York City and in Florida, one addressed to former Director of National Intelligence James Clapper and one to New Jersey Sen. Cory Booker.

The two parcels seized Friday bring the total number of suspected mail bombs to 12. All of the packages were irregularly shaped, in yellow manila envelopes, with six stamps that were not postmarked.

None of the bombs detonated, no injuries were reported and authorities said Thursday it appeared some of the devices were flawed and incapable of exploding, though it wasn't clear if they were purposefully structured that way or it was just bad construction.

According to sources, the explosive devices were made from PVC pipe and contained a timer (likely a digital alarm clock) to set off the detonator. The powder contained in the bombs comes from pyrotechnics. X-rays show there was likely shrapnel inside the PVC pipe, law enforcement officials say.

The return address listed on each one was the Florida office of ex-Democratic National Committee chair Rep. Debbie Wasserman Schultz. Investigators had said they were looking into any past incidents involving her office to determine if there could be any connections to the current probe, but have said there is no suggestion she had any involvement whatsoever. 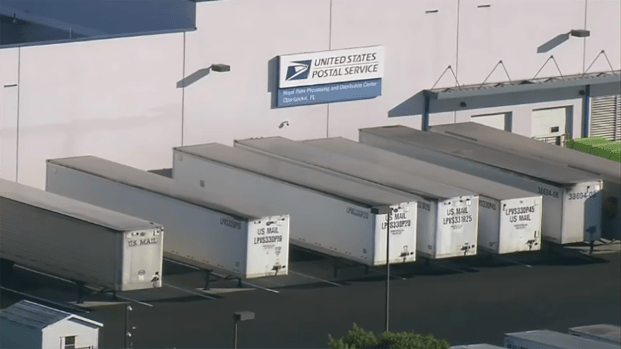