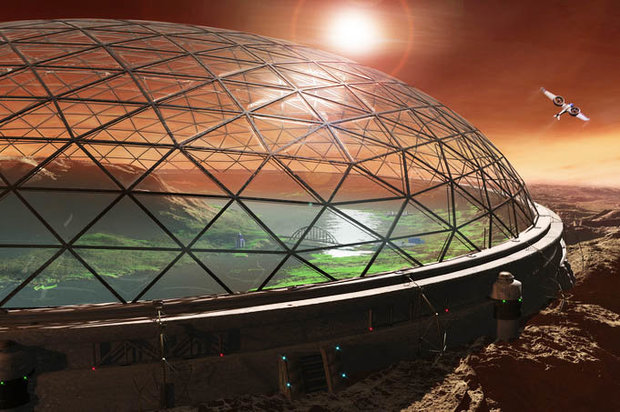 SCI-FI: Artists have long tried to visualise what life on Mars would look like (Pic: GETTY)

Sci-fi films have in turn glamorised and shot down the dream of humans living on the Red Planet, but what would it really be like?

Professor Lewis Dartnell from the University of Westminster and interior designers Hillarys teamed up to explore what a Martian home would be like.

Mars is in nature a brutal, inhospitable world — with sub-zero temperatures, giant dust storms and a thinner atmosphere impossible to breathe in.

The project, “Home on Mars”, shows a model home fitted out with all of the specialist features needed to keep humans alive.

COLONY: This is what the Home on Mars team came up with (Pic: HILLARYS)

“Would you want to spend most of your days indoors and not able to phone your friends and family back on Earth?”

This includes an airlock front door to maintain air pressure and oxygen levels in the home, as well as a protective layer of soil to shield from dangerous levels of radiation.

Special space farms would also become key components of every home, as humans would need to become Martian farmers and produce their own crops.

Sadly for meat-lovers, cheeseburgers and steak would no longer be on the menu, with homeowners instead adopting a vegan diet with the possible occasional treat of insects — high in protein and essential fatty acids but requiring little space and resources to farm.

Home on Mars also sheds light on the difficulties of the social and emotional aspects of life on a new planet.

INCREDIBLE FANTASY: This is how an artist imagines life on another planet (Pic: GETTY)

Communicating with Earth would be subject to a 40-minute delay in transmissions, making it almost impossible to call home.

Worse — the same technical problem would mean watching live TV and Netflix was impossible — so sport-lovers and box set addicts would suffer.

Instead, the colony would have to make-do with a Martian version of a streaming service.

Professor Lewis Dartnell, a partner in the "Home on Mars" research project, is a research scientist, presenter and author specialising in astrobiology and the search for microbial life on Mars.

Lewis said: "Humanity will venture out through the solar system probably sooner rather than later, and Mars is the most enticing location to move house. To survive on the red planet, Martian houses will have to look a lot like what weve depicted in this project.

“But although living on Mars may sound exciting, would you want to spend most of your days indoors and not able to phone your friends and family back on Earth?”

Boredom would have to be busted by socialising with one another indoors, because venturing outside would require a space suit.

And the risk of muscle wastage due to the lower gravity would require Mars-dwellers to work-out in a gym.

Tara Hall, spokesperson for Hillarys, said: “This is a fascinating research project that gives a great insight into what moving to Mars could actually look like for most people.”