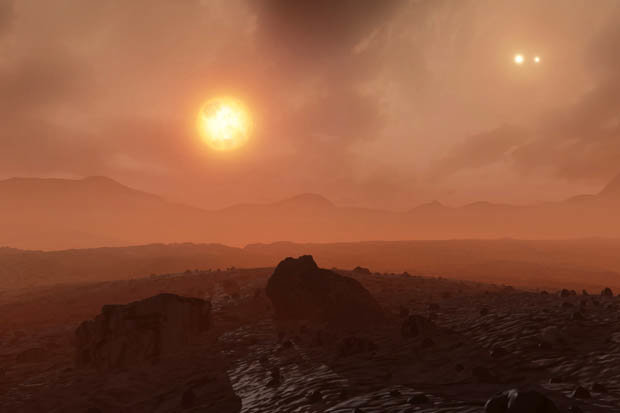 ALIEN DAWN: An artist's impression of the surface of Proxima b (Pic: GETTY STOCK)

Proxima b has been dubbed Earths “next door neighbour” and is often seen as a plausible home for both alien life and potentially our own.

It is roughly the same size as Earth and a comfortable enough distance from its red dwarf star to have a temperature ranging between roughly -90℃ to 30℃.

It is referred to as our “neighbour” because its star — Proxima Centauri — is a mere 4.24 light years away, the nearest to Earth after the Sun.

In more than a dozen simulations, researchers found the exoplanet almost always had some sort of liquid ocean, whether salt or freshwater.

“The larger the fraction of the planet with liquid water, the better the odds that if there's life there”

Climate simulations showed that “with a dynamic ocean, a hypothetical ocean-covered Proxima Centauri b with an atmosphere similar to modern Earths can have a habitable climate with a broad region of open ocean”.

“The major message from our simulations is that theres a decent chance that the planet would be habitable,” lead author Anthony Del Genio told LiveScience.

Del Genio, a planetary scientist at the NASA Goddard Institute for Space Studies, is hopeful that one day science will be advanced enough to probe the exoplanet for life forms.

"The larger the fraction of the planet with liquid water, the better the odds that if there's life there, we can find evidence of that life with future telescopes,” he said.

MISSION: Launch of planetary explorer Voyager 1 from from the Kennedy Space Centre in 1977 (Pic: GETTY)

But what is a lightyear and how close are we to our nearest neighbour really?

For context, Voyager 1 is the fastest spacecraft to date and travels at 1/18,000 the speed of light.

To put a further spanner in the works, NASA said the planet probably couldnt support an atmosphere —meaning no air and no protection from deadly solar radiation.

Proxima b orbits a red dwarf star, Proxima Centauri, which frequently flares with extreme ultraviolet radiation and strips the planet of its atmosphere.

There was an exceptionally large flare in March 2017 which was 10 times more powerful than the Suns largest flares.

If there was ever life on Proxima b, this massive energy burst could have wiped it out and made future habitation impossible.

Habitable Climate Scenarios for Proxima Centauri b with a Dynamic Ocean was published in Astrobilogy on September 5.

Deliveroo to ‘invest heavily’ in London tech with Amazon’s £450m