Steady rain soaked the tri-state area all day Tuesday, racking up nearly 2 inches of water in spots in hours and prompting flash flood warnings as a warm front menaced the region with a day-long washout.

Flash flood warnings were issued for the Bronx, Brooklyn, Queens and Westchester counties in New York, along with Connecticut's Fairfield County, through mid-afternoon as the Port Authority warned drivers to completely avoid the Holland Tunnel to New Jersey due to flooding. Parts of the Garden State were also under flash flood warnings as torrential rain poured down. Check the latest alerts in your neighborhood.

In Bayonne, the city's emergency management agency warned of numerous road closures because of flooding and urged people to stay home. Newark experienced a similar deluge, with authorities having to shut down all lanes on U.S. 1 & 9 approaching the Pulaski Skyway, which one Uber rider described as totally "under water." More than 100 workers had to be rescued from flooded factory grounds in Fairview. Elsewhere, multiple rescues were underway as drivers found themselves stranded in rapidly rising floodwaters. 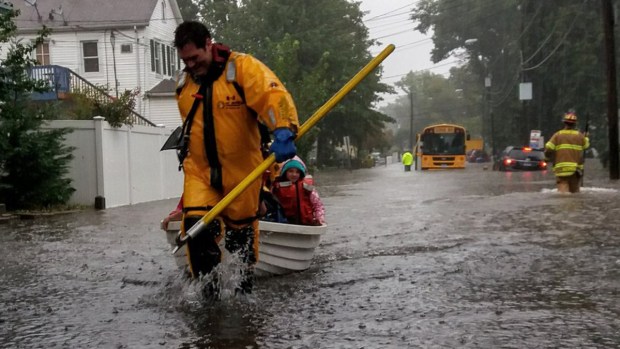 And, in New York City, as has become the norm in flash flood situations, it rained in subway stations across Manhattan. Footage posted to social media showed showers inside stations from Times Square to Bryant Park to 50th Street as crews scrambled to dry platforms.

Wet, breezy and unsettled weather is expected to continue through most of the day, featuring periods of downpours and possibly some late-day thunderstorms. Much of the heavier rain will ease by the afternoon, but isolated storms are expected to move across parts of the area through the evening.

Winds coming out of the southwest helped push warmer air into the region, bringing temps back into the low 70s Tuesday ahead of an even muggier forecast Wednesday as highs soar back near 80. Most spots will stay muggy and murky during the day. Stay on top of the latest conditions using our interactive radar.

Some severe thunderstorms may roll into the tri-state Wednesday evening, bringing the threat of damaging winds, downpours and small hail, but the weather is expected to improve by Thursday and into the weekend.