Ethiopia's Prime Minister Abiy Ahmed and Eritrea's President Isaias Afwerki raised the Eritrean Flag together inside the newly renovated embassy, while a military band performed the Eritrean National Anthem.Ethiopia's information minister, Yemane Meskel said in a tweet that the event was "yet another milestone in the robust and special ties of peace and friendship both countries are cultivating with earnestness in these momentous times."Eritrea's embassy in Ethiopia was closed in 1998 when border disputes worsened already tenuous relations between both countries.Beyond easing tensions in the volatile Horn of Africa, the new relationship also carries economic and security incentives for both countries.The opening of the embassy was the culmination of Afwerki's three-day visit to Ethiopia, his first to the country in 22 years. The Eritrean President was given a dignitary's welcome on his arrival in Ethiopia. Afwerki accepted the gift of a horse, a shield, and a spear from President of Ethiopia's Oromia Region, Lemma Megerssa, according to Prime Minister Abiy's chief of staff, Fitsum Arega. "… A spear and shield is the most prized possession of an Oromo traditional warrior," Arega explained in a tweet.

"I feel boundless joy as I convey to you the message of peace, love and good wishes of the people of Eritrea. And, I congratulate you warmly for the successful and historic changes that you have brought about," Eritrea's President Isaias Afwerki said at a concert celebrating the peace process at the Millenial Hall in Ethiopia's capital, Addis Ababa."We have triumphed over the toxic schemes of the past years aimed at sowing the seeds of hate, resentment, and destruction. These malignant acts are indeed anathema to our cultures as well as to our historical and cohesive interests. We are now jointly embarking – with determination – on the path of development, prosperity, and stability in all fields and fronts." he added. 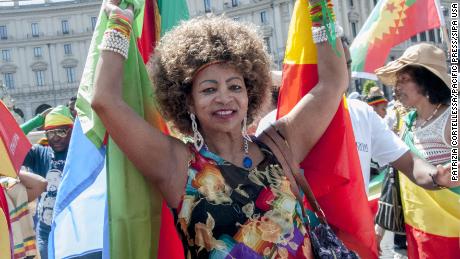 The Embassy opening comes a week after Ethiopia's Prime Minister Abiy Ahmed visited Eritrea and signed a pact with his Eritrean counterpart bringing a symbolic end to a 20-year old dispute.Both countries have been on a lengthy military standoff since border battles broke out in 1998. An agreement was signed in Algiers in December 2000 to end the two-year conflict.However, hostilities resumed after Ethiopia refused to accept the 2002 ruling of a UN boundary commission regarding the border town of Badme and surrounding areas.Since ending their 'state of war', the two leaders have agreed to open embassies, ports, phone lines and resume flights between the two countries.