The inferno that devoured a multi-family home in New Jersey last week, killing two young brothers, their cousin and another boy, has now claimed the life of another child, the prosecutor's office said Tuesday.

Shamira Lopez died of the injuries she sustained in the blaze Friday in Union City. She was only 4 years old, the prosecutor's office said.

Four other children were killed in the fire; they've been identified as brothers Jason Gonzalez, 2, and Christian Josue Mendez, 7; their cousin, Mayli Wood, 5; and 13-year-old Jose Felipe Tejada.

Prosecutors said Monday the fire appears to have started on the first floor of the three-story home at 416 25th St. They're still looking into a cause and origin. 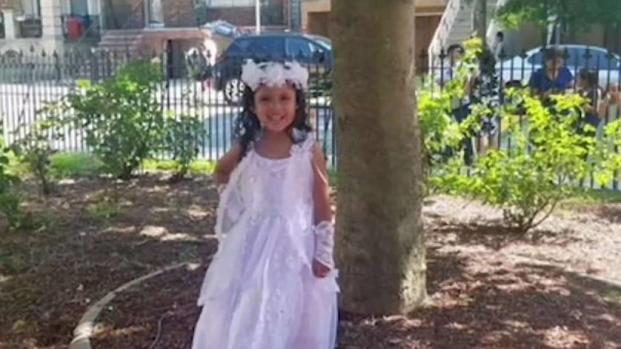 "They were all unconscious, one child's face was burned," said Eddei Miranda.

Eudes Hernandez, a friend of a family that lost a child, was at the corner of the street when he says he saw smoke and fire. He ran to the flaming building and tried desperately to help get everyone out. He said he tried to knock on the doors, but he couldn't even see anything because of all the smoke.

"I feel so bad for them. I knock on the door, try to get out everybody," he said.

Chopper 4 footage showed an entire side of the multi-story building charred black from heavy fire. The windows looked like smoldering panels of charcoal as smoke billowed from the roof and sides of the house. People were seen gathering on the roofs of neighboring buildings to watch the response unfold.