The human rights group says it has spoken to more than 150 victims and eyewitnesses to gather evidence of escalating violence in the northwest and southwest region of the country. The report stated that English speakers in the country were being targeted by both the Cameroon military and armed Anglophone separatists in waves of violence that Amnesty describes as "unlawful, excessive and unnecessary." In the report titled, "A turn for the worse: Violence and human rights violations in Anglophone Cameroon," victims gave harrowing accounts of beatings and allegations of simulated electrocution and torture carried out by the military as well as attacks on schools and teachers by armed Anglophone separatists. Residents of Cameroon's two English-speaking provinces, which make up 20% of the country's population, have longstanding grievances against the largely Francophone central government. They complain of being marginalized and having the French legal and education systems forced upon them, a practice that dates back to the post-colonial 1960s era. Tensions boiled over last year when protesters took to the streets in Cameroon's Anglophone regions, later calling for symbolic independence from the West African country's French-speaking majority. Amnesty says Cameroon's military has responded to these protests with "torture, unlawful killings and destruction of property." Some of the people Amnesty spoke to described being severely beaten with sticks, hammers and while blindfolded by soldiers in the Cameroon army. One man who spoke to Amnesty said he and others were arrested in December last year and tortured with their hands tied behind their backs. "They … gagged us and tied our faces with our towels and shorts …" he said. "They then made us lie in the water, face down for about 45 minutes. … During three days, they beat us with shovels, hammers, planks and cables, kicked us with their boots and poured hot water on us … when I tried to move and shouted, one of them used the cigarette he was smoking to burn me."Amnesty said it had also received information about numerous instances of deaths in custody.Graphic images of torture and mutilated bodies have flooded social media sites as Anglophone Cameroonians appeal for international help against what they say is genocide. CNN has seen some of these graphic images but cannot independently verify their authenticity. "Their heavy-handed response will do nothing to calm the violence — in fact it is likely to further alienate Anglophone communities and fuel further unrest," said Samira Daoud, Amnesty International deputy director for West and Central Africa, in a statement. For their part, armed separatists reportedly attacked at least 42 schools between February 2017 and May 2018, targeting teachers and students for not taking part in a boycott of schools, long seen as a symbol of Francophone marginalization, Amnesty said. 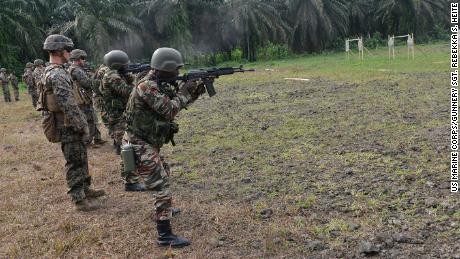 A teacher told Amnesty he was wounded after a masked gunman, suspected to be a member of an armed separatist group, stormed his school in the northwest province and shot him in the leg. "The assailant … told me that I was still coming to school in defiance of calls for a schools boycott. He then asked me to raise my hands, but before I could do so, he shot me. I fell to the ground…," the teacher told Amnesty. "The armed separatists repeated targeting of the general population demonstrates a total disregard for human life, and is another example of the threat faced by people in the Anglophone regions," said Daoud.

Didier Badjeck, a spokesman for the army, rejected Amnesty's claims of torture and violence, dismissing them as "rumors."Badjeck told CNN: "The Cameroon army is professional. Amnesty is writing against the armed forces based on rumors." Badjeck labeled the armed separatists "terrorists," and accused them of attacking and burning down schools. "Since 2016, they have been attacking schools and we are working against terrorists. The army defends itself against attackers," Badjeck said. "If any of our soldiers is found to have breached the rules of engagement, they will be punished," he added. President Paul Biya has condemned "all acts of violence, regardless of their sources and their perpetrators," although some see the actions of the security forces as a way to secure his 35-year grip on power.