The former US presidential candidate sat down to an interview with the novelist on Sunday after a lecture when Adichie asked about Clinton's twitter bio. "In your Twitter account, the first word that describes you is wife. And then I think it's mom, and then it's grandmother," Adichie said at the PEN World Voices festival."And when I saw that, I have to confess that I felt just a little bit upset. And then I went and I looked at your husband's Twitter account, and the first word was not husband." The novelist was referring to Bill Clinton's twitter bio which reads 'Founder, Clinton Foundation and 42nd president of the United States.'Hillary, whose Twitter bio states, 'Wife, mom, grandma, women+kids advocate, FLOTUS, Senator, SecState, hair icon, pantsuit aficionado, 2016 presidential candidate,' said women should be free to celebrate their success by their professional as well as their personal achievements.Clinton replied, "When you put it like that, I'm going to change it" although she added that individuals should be able to define their accomplishments in ways they feel satisfied. "It shouldn't be either/or. It should be that if you are someone who is defining yourself by what you do and what you accomplish, and that is satisfying, then more power to you." "That is how you should be thinking about your life and living it," Clinton said at the event. 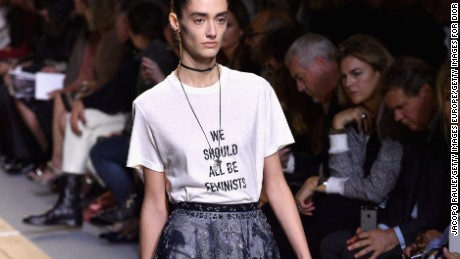 Adichie has been forthright with her views on politics, women's rights and gender equality. Her TEDxEuston speech "We Should All Be Feminists" was turned into a book and given to every 16-year-old in Sweden. Beyoncé also sampled it in her "Lemonade" album.However many on social media disagreed with the novelist's comments. The question contradicts the argument for feminism which the novelist has advocated in her books and public engagements, they said."I love Chimamanda but her views on everything is not always right and certainly not a standard for everyone. If feminism is about freedom of choice then some women should respect other women's choice to identify as wife or Mrs somebody!" Rebecca Roberts said in a tweet. Blessing Abeng told CNN women should not be diminished for their domestic roles and should be celebrated for taking up such responsibilities. "If she wants to put wife in her bio, we can respect it. Mother is fine too. Obama did it too. I think it's Hillary's choice to arrange the order of her roles how she deems fit. In all, she is Hillary, she is all of those things and she is still powerful," she said.Some said Adiche's remarks had stirred a debate on the definition of equality and feminism. "Isn't feminism based on the principle that women can be whatever and whoever they choose to be? That women have the agency to define and own their own narratives?" said Deoye Falade in a Facebook post."So if an almost all-conquering former Secretary Of State (who almost became the most powerful woman in the world) also sees herself as a wife, what's wrong with that?"Adichie addressed criticism following her earlier remarks on Hillary's Twitter bio on Facebook saying she's chosen to talk about feminism "knowing very well the kind of hostility it brings." "The truth is that we were supposed to be having a 'conversation', the context of our conversation was personal and warm," she said. "I had made the decision to speak from the heart, and it would be dishonest to pretend that I had not reacted personally to so many issues around Ms. Clinton, whose life has become a kind of crucible of all the questions that affect women.""We all react personally to public figures. And I was upset that the Twitter bio of a woman who is the most accomplished person to run for President of the United States, would begin with 'wife.' Considering her personal history, it just didn't seem to fit. I felt that 'wife' was used as an attempt to placate all the men and women who will not vote for a woman unless they are able to see her first in domestic terms."

Calm as Niger counts down hours to crucial election