On Wednesday Maduro announced he had been unable to distribute thousands of pork hind legs to the poorest neighborhoods in the country — as he had promised earlier in the month. And he put the blame squarely on Portugal."What happened to the pork?" Maduro asked during a Wednesday televised address. "They sabotaged us. I can name a country: Portugal." Like many in Latin America, Venezuelans typically eat pork legs, known locally as pernil de cerdo, during the Christmas holidays. Maduro had promised to distribute the pork as part of the monthly subsidized food ration for low-income families. "It was all set, because we had bought all the pork there was in Venezuela, we bought it all. So we had to import, and so I gave the order and I signed the payments. But they went after the bank accounts, they went after the two giant ships that were coming. They have sabotaged us," said Maduro.It's not unusual for the Venezuelan government to blame other countries, including the United States, for its crippling economic woes.Responding to Maduro's comments, Portugal's Minister of Foreign Affairs Augusto Santos Silva, told Portuguese Radio TSF that the government had no power to "sabotage the pork hind leg.""We live in a market economy, exports are the competency of companies," Santos Silva said. 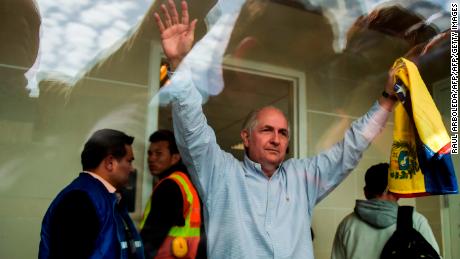 Portuguese food company Raporal, which supplied pork hind legs to Venezuela in 2016, issued a statement saying that Venezuela still owed it, and its parent company Agrovarius, close to 40 million euros stemming from last year's order of 14,000 tons of pork hind legs. The statement, reported by Portuguese public broadcaster RTP, added that Venezuela had made some payments on that debt — but that no payment had been received since August.Raporal had not provided any pork to the Venezuelan government in 2017, the company said. It had received a promise from the Venezuelan ambassador that full payment of the 2016 debt would be made no later than March 2018. "Raporal is not aware of any act of sabotage by Portugal in relation to to the supply of pork hind legs to Venezuela, but rather confirms that it is Venezuela that has not timely fulfilled its payment obligations."

'Nothing has been delivered'

Venezuelans who protested on Wednesday and Thursday said they were angry that another government promise had been broken. Dubbed the "pork revolution" on social media, the protests saw residents take to the streets to bang pots and pans and burn trash. Many complained that their holidays would once again be marred by shortages of food and basic supplies. 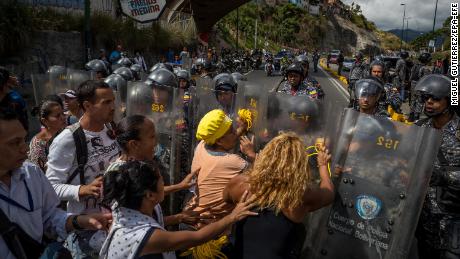 "They promised us the pork hind legs, chicken, meat," Aracelis Hinojosa told CNN, "but nothing has been delivered." "I am 100% Chavista, I don't deny that, but the same way that we have voted for the President, we can also stop [supporting him]," said Hinojosa.Chavistas are staunch supporters of former Venezuelan President Hugo Chavez's socialist ideas and programs. Maduro, Chavez's handpicked successor, has continued to enjoy the support of many of Chavez's followers.

The Venezuelan economy has spiraled toward collapse in 2017, which has caused the currency, the bolivar, to plunge in value and prices for everyday items to skyrocket. Hyperinflation has caused food and medicine shortages and destabilized the once robust economy.

Freddy Bernal, Maduro's minister for food ration distribution, blamed the United States and Colombia for the latest shortage. "I would like to inform Venezuela that 2,200 tons of pork hing legs are being held in Colombia. The sabotage is not only on the US to freeze the accounts of those who sell food to the country, now the Colombian government has retained the legs in the border city of Paraguachon for 7 days. " Bernal tweeted.He added that the planned deliveries were "sabotaged by the US and their commercial allies around the world."

Net neutrality revival may hinge on 1 vote in Senate