Balbi said the navy had allowed nearly double the amount of time it would have been possible for the crew to stay alive if the submarine was under water. He didn't discuss what he thinks happened to the 44-person crew.The search mission would involve a reorganization of the vessels and other assets that have been deployed, and the operation will continue until the submarine is found, he said.Ships and aircraft still are scouring the South Atlantic for the ARA San Juan, which disappeared November 15 a few hundred kilometers off Argentina's coast.The Argentine navy had previously saidthe vessel's captain reported a short circuit in the vessel's battery system shortly before the last known contact. On Tuesday, the navy said a sound consistent with an explosion was detected in the ocean near the sub's last known location on the day it disappeared.The Argentine navy said it didn't know about the explosion-like sound until last week, when the United States and an international organization said they had uncovered the acoustic data. 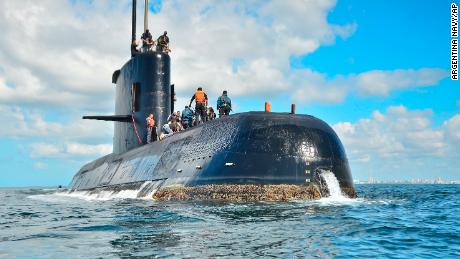 There was no evidence of any attack and no information on the cause of the noise, Balbi said last week.The San Juan had been traveling from a base in Argentina's far southern Tierra del Fuego archipelago to its home base in Mar del Plata, on the country's northern coast.The sub was a few hundred kilometers off the coast when it disappeared, roughly halfway between its departure point and destination.Officials have said the submarine had enough air for seven to 10 days when submerged.