A new study conducted using satellite data shows that artificial lighting is growing brighter. The data suggest this is disrupting the order of ecological and human life, which previously depended on natural light sources such as the moon.

The international study led by Christopher Kyba of the GFZ German Research Centre for Geoscience tracks what researchers are calling a negative trend that has implications for the health of human beings and the environment.

The light pollution that humans are creating can affect living things, because they have evolved in accordance with the normal day-night cycle, according to the study.

This is due to the fact that major sources of light during the night would have come only from the moon, or other sources like auroras, volcanoes and wildfires.

An international team of scientists used the Visible Infrared Imaging Radiometer Suite (VIIRS), a satellite sensor, to find out whether the human demand for light is still on the rise or leveling off. VIIRS is cited as a collaboration between NASA and the National Oceanic and Atmospheric Administration

Researchers studied data for the report in the month of October every year from 2012 to 2016, and ultimately discovered that the artificially-lit portion of the Earth's surface continued to grow by 2.2 percent per year. During this same period, Earth’s radiance also climbed by 1.8 percent per year.

The growth moved fastest in developing regions like Africa, Asia and South America. However, countries that were already brightly lit, such as the US and Spain, were found to be stable in their brightness.

A small number of war-torn countries like Yemen and Syria saw their artificially lit levels drop.

But even in the brightly lit countries that appeared stable, light levels are most likely still on the rise, according to the study. This is because a lot of well-lit cities have been replacing the yellow-orange sodium lights that they had been using with energy-saving LED lights.

Sodium lights emit a small amount of infrared radiation, which would have made them appear brighter to VIIRS. The combination of losing the infrared signal, coupled with not being able to see blue wavelengths, means that VIIRS would register this particular area with the LED lights as dimmer, even though they may have appeared brighter than they were before to the naked eye.

Many issues can arise if people work against their biological day-night clocks. Specific health problems such as diabetes, obesity and depression-like symptoms may emerge from undertaking these practices, according to the study. Aside from humans, the current use of artificial light can also have a negative effect on plants and microbes. The study points out that 30 percent of vertebrates, and more than 60 percent of invertebrates, are nocturnal. 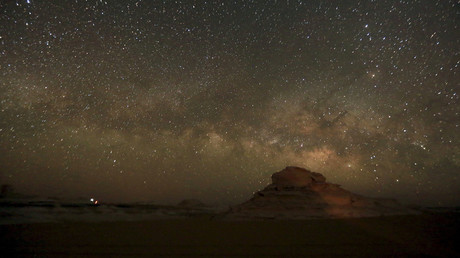 “From an evolutionary perspective, now, artificial light at night is a very new stressor,” one of the study's authors, Franz Holker of the Leibniz-Institute of Freshwater Ecology and Inland Fisheries said, as reported by the Los Angeles Times. “The problem is that light has been introduced in places, times and intensities at which it does not naturally occur, and many organisms have had no chance to adapt to this new stressor.”

Holker says that the largely new phenomenon of artificial light “threatens biodiversity through changed night habits, such as reproduction or migration patterns, of many different species: insects, amphibians, fish, birds, bats and other animals.”

He added that humans are also impacted by artificial light, because there are certain physiological processes that occur during the day and others that happen at night, and these processes often work against each other.

As the study suggests current trends to be heading in the wrong direction, Christopher Kyba stated there are some possible solutions to thwart them.

He said using LEDs that don't have a blue component is a better choice for people to consider, and there are also ways to position and manage existing light sources, like lamps in parking lots, so they are not as bright, but still remain effective.

Brexit supporter Johnson far ahead in contest to replace PM