The ARA San Juan, which is carrying 44 crew members, including the country's first woman submarine officer, was last seen a week ago, on November 15, in the San Jorge Gulf, about 268 miles off the coast of Argentina. The submarine has only enough air to last seven to 10 days if it has remained fully immersed since that time, experts say. That's the worst-case scenario. It's a different story if the submarine has surfaced or "snorkeled" — that is, raised a tube to the surface to refresh the vessel's air. "There is no type of contact, not passive nor active," said Enrique Balbi, spokesman for the Argentine navy.

11 nations join in the search

Reports of contact with the sub have served only to stoke false hope. Rumors of a recent distress call are false, the spokesman said. Communication signals picked up Saturday and noises detected beneath the water Monday did not originate from the sub, and a dinghy with survival supplies found Tuesday is a different model than the ones with which the San Juan is outfitted, Balbi has said.On Tuesday night, a British polar ship saw flares — one orange and two white — east of where it was conducting operations, prompting the dispatch of a search-and-rescue team consisting of three ships and two aircraft. For many hours, they patrolled the area "and were not able to detect any magnetic anomaly," Balbi told CNN. Plus, the spokesman has said previously, the flares aboard the San Juan are green and red. Thus, the search will continue across a 1,000-kilometer-long (621-mile) swath of the South Atlantic, parts of which are roughly 900 kilometers (559 miles) from the Argentine coast. The search area covers 480 square kilometers (185 square miles), about the size of Albuquerque, New Mexico, or Helsinki, Finland, and more than twice the size of the Argentine capital of Buenos Aires.Eleven countries have joined Argentina in the search, contributing personnel, planes and boats. Meanwhile, merchant ships, scientific vessels and fishing trawlers have joined in the effort. According to state-run Telam, Balbi said the conditions Wednesday were perfect for the aerial and nautical search, and he urged family members of the crew "not to lose hope."

'She knows her father is missing' 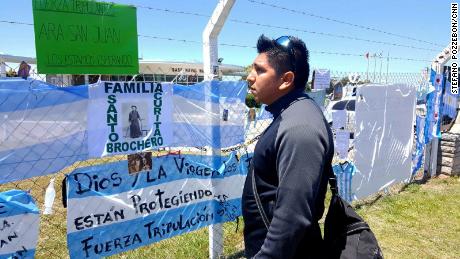 Outside the Mar del Plata navy base, to which the submarine was returning when it vanished, Federico Ibañez is among the many family members and well-wishers awaiting a storybook ending to his family's frightening saga. His brother, Christian, is a radar technician on the San Juan.He questions why the Argentine navy continues to say the boat could be on the ocean surface, and why rescuers took so long to begin canvassing the ocean floor. "The other relatives really have more hope and think everything will be OK, while I think the navy is wrong in saying the submarine could be on surface. It's a lack of respect. If it was on the surface, they would have found it. They didn't, and they didn't look for them at the bottom," said the 34-year-old, who traveled hundreds of miles from Rosario to Mar del Plata. "If they did it earlier, it could have been different."Christian Ibañez has a daughter, Elisa, 9. Her mother has told her little, hoping that her father will return and she won't have to explain what happened. "She knows her father is missing, but she knows he's fine and will be home soon," his wife, Fernanda Valacco, told CNN. "I am sure all of the 44 will be fine and could come here any moment."Federico Ibañez described a tense scene on base as family members huddle together praying for word of the sub's discovery. "They all stay there in a big room with bunk beds and some desks. Everybody is silent. Everybody is waiting. Waiting for what? I cannot stay there," he said. Aboard the sub with Christian Ibañez is Eliana Maria Krawczyk, Argentina's first female submarine officer. In 2004, she joined the navy after seeing an ad about military ships. She has voiced hopes of one day commanding a sub herself. "At the time, there weren't any female officers in the force. I took it as a challenge," she once told the Argentine Defense Ministry in a video interview. "You can do the same things than any men do, even if you are in traditionally male-dominated environment. … Any women can do it." 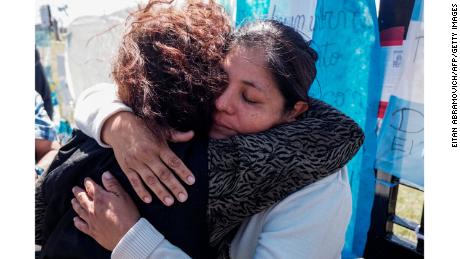 The Argentine navy lost contact with the ARA San Juan submarine on November 15, shortly after the vessel's captain reported a failure in the battery system while the sub was submerged off Argentina's South Atlantic coast, the military said.The submarine was traveling from a base in far southern Tierra del Fuego archipelago to its home base in Mar del Plata on the northern side of the country. Two days before it disappeared, the San Juan reported an electrical short circuit, said navy Cmdr. Gabriel Galeazzi. The sub's crew did not provide additional information on what caused the short circuit or what systems had been affected, he said, but the problem is considered routine, and the crew was reported safe.The sub was last seen in the San Jorge Gulf, off southern Argentina's Patagonia region, nearly midway between the bases. The vessel, which is 65 meters (213 feet) long and is powered by one electric and four diesel engines, had been due to arrive at its destination Sunday.Under normal circumstances, the vessel has sufficient fuel, water, oil and oxygen to operate for weeks without external help, said Balbi, the navy spokesman. The vessel could snorkel "to charge batteries and draw fresh air for the crew," or open its hatch for air, if it surfaced, he said.If it wasn't able to get near the surface, Balbi said, its oxygen might last only seven days. Peter Layton, a visiting fellow at the Griffith Asia Institute in Australia, however, said the crew could have up to 10 days of oxygen.If the hull is intact, it can withstand ocean depths up to about 600 meters (1,970 feet), Layton said. If the vessel is resting on Argentina's continental shelf, it is likely in waters shallower than 600 meters, but if it's farther out into the Atlantic Ocean, it could be below its crush depth, in which the hull buckles under pressure.

Missing Texas Man Was ‘Entirely Consumed’ By His Own Dogs, Sheriff Says

Bypassing parliament on no-deal Brexit would be unlawful, says campaigner